Kathmandu & Everest Base Camp I

Nepal is one of the least developed countries we’ve visited. You won’t find a single motorway and you’ll struggle to find many decent roads outside of its capital. It’s been a little bit like going back in time but as with Myanmar the Nepalese are very friendly. Most of them will greet you with an enthusiastic ‘Namaste!’ and a warm smile and we really got the impression that they genuinely appreciate the tourism and the money it brings in that the country so badly requires. The main tourist area is populated with cute cobbled stone streets lit up in multi-coloured fairy lights at night time with 100+ shops selling the same trekking equipment. There are different coloured triangular flags dotted around the town and cafés/restaurants are well set up for Johnny foreigner. Fancy a soy chai laté with vegan foam? No problem!

We arrived in Kathmandu on Monday 1st April (happy April Fools y’all!) in the evening time. We’d only have two nights here before we’d start the trek and our main priority that day was to meet with the company we booked our trek with, Nepal Environment Trekking. They were highly recommended to me by a work colleague and trusted recommendations are worth their weight in gold when choosing who to pick as there are many choices available. That initial meeting was a chance to meet our guide Kaji who’s been doing this for fifteen years and take a look at the items they were supplying us with: a sleeping bag, outer jacket, trekking poles and a duffle bag. We were happy with everything. It was just going to be the three of us plus our porter Rami who we’d meet in Lukla and would carry our main luggage. Porters are incredible people with super human strength (carrying bags using a strap on their heads) and we’re so grateful for his help as it just wouldn’t be possible otherwise. I was hoping we might have other travellers with us but in hindsight it’s been nice to be able to go at your own pace.

If you’ve ever followed the tv show known as ‘The Apprentice’ you might recall there is always an episode where the contestants are given a shopping list of random items to hunt down in an unfamiliar market place abroad and haggle as best they can for the lowest price. This was our second day in Kathmandu and it was definitely stressful! We managed to buy half of what we needed in Dehli but couldn’t buy the bulkier items in advance as we had very little room in our bags. We made a decision that morning to get a suitcase so we could keep everything we bought and have a little more breathing room for souvenirs. We’d leave it behind in Kathmandu along with other luggage we wouldn’t need for the trek and collect it on our way back. It was a long day and having to haggle on every item as you know the original price is far too high is exhausting. By the end of the day you’re almost ready to hand them whatever they’re asking for.

The Everest Base Camp (EBC) trek is one of the best known in the world and regarded by many as pretty damn difficult. We’re three days in and we’d definitely agree! You’ve got three main obstacles in your way that you need to conquer… the walk itself, the cold weather and the altitude. We saw the movie ‘Everest’ years ago and felt inspired to see the highest mountain in the world in person. We’ve wanted to do a fundraiser for charity for quite some time and this was a good way to combine the two. We’ve managed to raise almost US$2,800 for the children’s International Make-A-Wish Foundation for terminally and seriously ill children and we’re very thankful for every single donation. If you want to know about this charity, check out our page http://worldwish.rallybound.org/mattandalberto.

I started training for EBC immediately after Christmas. I run three times a week in the gym but I knew I would need to make some modifications. I upped it to four times and rather than just weights and running I mixed it up with a lot of stair climbing and outdoor trekking. We had to buy our trekking booths a few months beforehand and break them in to avoid any blisters on the mountains. We joined up with a simulated high altitude gym in Sydney which removes the oxygen from the room to simulate 3,500 metres above sea level. We were able to spend time walking at a steep incline, running and lifting weights to get our bodies used to higher altitude conditions. Alberto has previous mountain trekking experience summiting Kilimanjaro and while I’d liked to have done more hopefully we are able to do this. I worry about one of us not being able to make it. There is no shame in at least trying though. If you’re considering attempting EBC there is plenty of professional advice available online. Ian Taylor Trekking is a great website with an abundance of information. They charge more than twice the price than most other trekking companies… I didn’t see enough value add to justify the higher price when scrutinising our final two choices but I’ve no doubt they do a fantastic job with their clients and the information they provide is free of charge and really valuable. They were a very close second choice.

Normally trekkers would fly from Kathmandu to Lukla but as of April 1st runway repairs are taking place and we would instead have to be picked up at 2am and driven for four hours on the bumpiest of roads with barely a wink of sleep before a three hour walk to our first overnight stay in Phakding. Looks like the April Fools joke was on us! Thankfully the first day is a relatively easy walk with only modest inclines and declines. Lukla is 2,800 metres above sea level and Phakding is 200 metres less. The whole trek is filled with ups and down. Every time you gain some good height it’s not long before you’ll lose some of it and even by the second day your heart will sink when you realise you’ll have to go down as you know it’s only a matter of time before you’ll have to go back up. We’ll be returning via the same route so it may not be a huge amount easier on the way back. 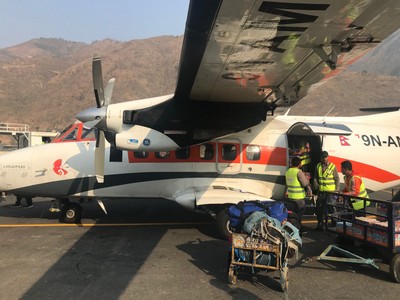 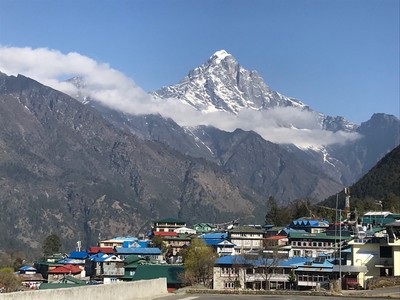 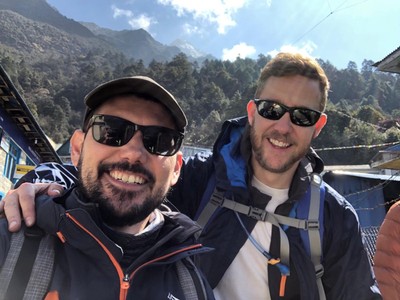 Our lodge, aka tea house that night was very basic as most of them are up here. There is no heating in the bedroom, toilet paper, an ensuite costs extra and most have paid showers only. By our third tea house we’re told not to even attempt a shower as it could result in a severe flu. We shall heed this advice and baby wipes will become our new best friend! 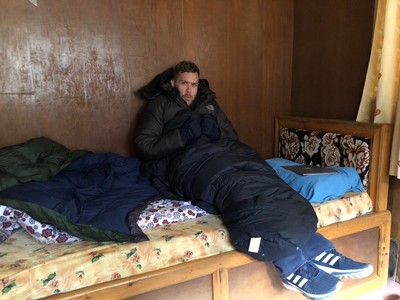 Day two was an early start and we had to be ready for breakfast by 7am. We’re told there’s usually blue skies and sunshine by morning making it quite warm before cloud arrives in the afternoon followed by a sharp drop in the temperature in the evening. So far they haven’t been lying. Our research told us that April was a great month to go and we were not prepared for how cold it gets in the evening. Bearing in mind we’ve come from India which was almost 40 degrees at times and I guess it was going to be that bit harder for us to get used to it. Our six hour walk on the second day took us to Namche Bazaar, the last big town in the region and the last chance to enjoy a shower and buy anything else we may need. Between the temperature dropping further and the altitude it’s apparently going to get a whole lot harder from here on in. The last two hours reaching Namche was painful. You’re hoping against hope that there will be a straight section but the steps keep on coming. During a particularly difficult section my thoughts varied from ‘wow I sound like Darth Vader’ to ‘FML I regret every KFC and cider I’ve ever had’! We could barely speak by the time we reached our tea house but we felt like kings having a hot shower completely ignoring how basic and cold the bathroom was. After two days it was lovely to put on new dry clothes that weren’t smelling of cold sweat. Better appreciate these good moments while we have them. 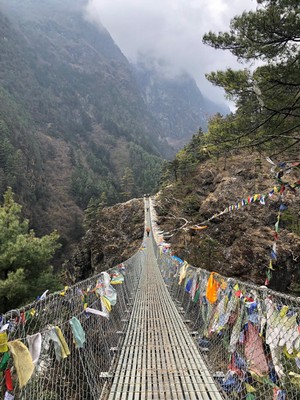 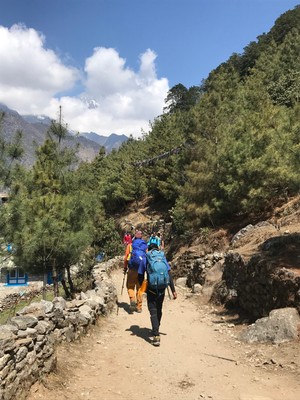 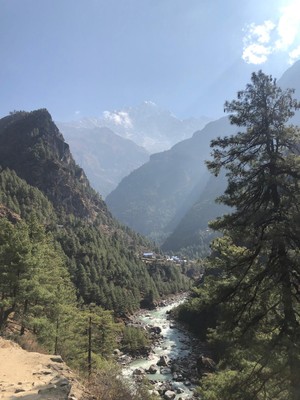 This is our porter Kami (to the left) and guide Kaji (front). They've been looking after us extremely well. 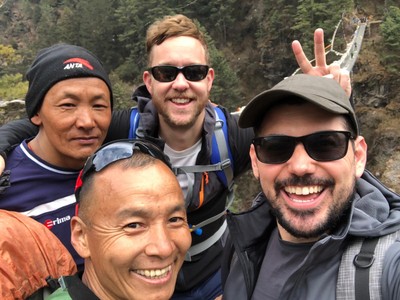 And of course, there's an Irish pub up here! 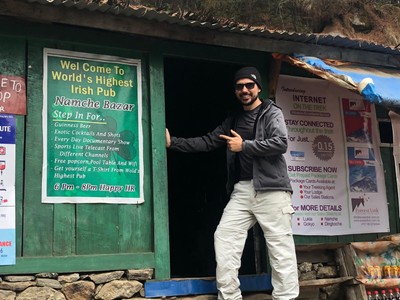 Today is a welcome day of rest as you need to let your body acclimatise so as to avoid altitude sickness which can induce headaches, nausea, lack of appetite and generally feeling awful. Speaking of which, Alberto’s had a cold since our 2am start in Kathmandu and thankfully he didn’t have to walk today. My legs are not feeling too bad considering yesterday but tomorrow is going to be another hard one as we make our way to Tengboche. Don’t let my above rants put you off from EBC or another physical challenge you may be considering. Some of the scenery out here is just postcard perfect and photos don’t do it justice. The air is so fresh and this certainly beats sitting in the office. Aside from a few 5km races and one 10km this is my first major physical challenge. I’d really love to accomplish it and I’ll be thinking about the generous donations for the Make-A-Wish Foundation when the going gets tougher.