Here's a belated map update for India: Kolkata to Varanasi, Jaipur to Rishikesh, New Dehli to Agra and then back again before the flight to Kathmandu. Now that we have good wifi connection again we've also been able to go back in and add photos to our last two blog entries. 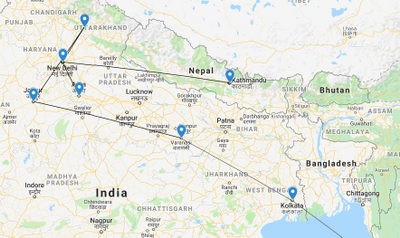 Leaving Dingboche we both felt very determined to push on but we were starting to tire of the basic accommodation and it wouldn't be long before we'd start to feel fed up of the food. Yes it's true, I had spoken about the variety of the food on offer in my last entry but you know after so many days eating the same selection of vegetarian Asian dishes your body starts to crave something different. I kept thinking about having a good burger or fajitas with all the trimmings. Dear waiter... if there's any chance of guacamole on the side that would be wonderful? No? Not a chance!

Our next stop was in a remote little place called Lobuche and from there we'd make the trip to Gorak Shep. Our accommodation at Lobuche was pretty decent. It was basic but it was clean. Gorak Shep was a challenge. This was our final lodge en-route and our expectations were rock bottom. The room we stayed in was like a giant cardboard box and as for the toilets... well by now I had gotten used to holding my nose in most of the toilets on offer and you know you just have to grin and bear it. Or have a moan and a laugh with your other half about it as I did with Alberto over the course of the two weeks. As soon as we checked into our lodge in Gorak Shep we had a quick cup of tea (for a change) and off we went to the destination we had been thinking about constantly for the past two weeks. It would take us two hours to get there and on the way we passed glaciers and plenty of rocky obstacles to step over or walk through. By now our surroundings were mostly covered in snow with enormous, striking and beautiful snowy/icy mountains encompassing our view. You could well be forgiven for thinking you're at a ski resort somewhere in the alps. Only there was no sign of any chair lifts or a single piece of ski gear in sight. Despite being tired I could feel an extra sense of adrenaline to be here. On we went and a couple of hours later we reached our destination point... Everest Base Camp! Now the thing is you can't actually go into the camp itself as there are hundreds of climbers getting ready for their summit bid so instead you're taken to a vantage point close by where you can see all of the tents and the general circus it has now become. And of course... the infamous Khumbu Icefall. Despite my earlier excitement I felt a little underwhelmed. You could only see the very top part of Everest. To get the best view we'd have to make one last push the following morning to Kala Patthar (5,644m/18,519 feet). 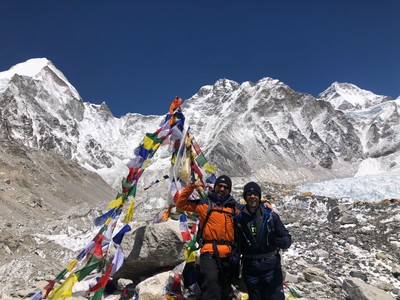 Kala Patthar was always a 'bonus day' for us and on day two we had written it off. How could we possibly ascend another few hundred metres if we even made it to base camp when we were struggling to ascend into Namche Bazaar? From speaking with our guide Kaji and other trekkers on the way it appeared that only 50-60% of those who go to EBC make it to KP. Usually folks who attempt it get up at 3am so they can make it there for sunrise. We had little interest in venturing out at crazy o'clock in serious minus conditions but we really wanted to give this a go. We asked our guide if we could have an early breakfast at 6am and make a dash for it afterwards. No problem. Going to bed the night before it felt like we had one final school exam in store before we could begin to relax.

The first hour of this walk was awful for me, not so much for Alberto. It was freezing cold, and I was starting to worry about my toes and fingers as I just couldn't warm them up. I never felt so happy to see the sun before when it finally came up and my shoes and gloves began to warm up. The walk was fairly vertical and it was the first time I had to use my trekking poles. They'd be just as important to get back down. You can really feel the altitude and even walking a short distance you end up out of breathe very quickly. I must have thought 'FML' to myself so many times that I lost track but after a couple of hours we could see the end point. One final push and we were there! We felt a sense of elation and accomplishment that was missing from base camp. By now our surrounding views were simply spectacular and I'm not sure the photos here do it justice. Our guide congratulated us and we felt such a sense of relief and accomplishment. Secretly I had always hoped we'd make the summit of KP but I never felt confident about it. 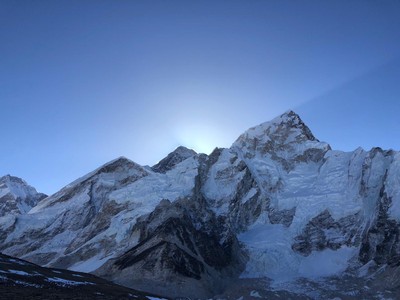 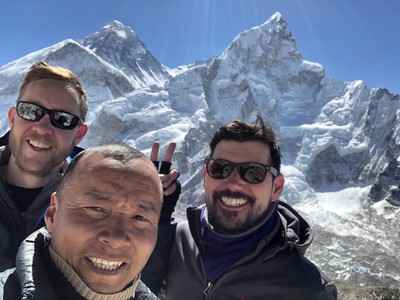 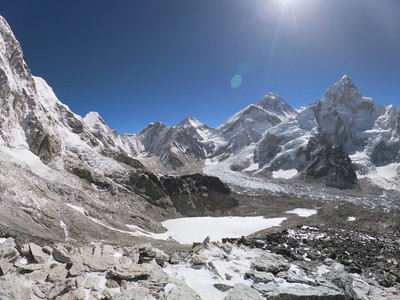 We spent around twenty minutes on top and tried to soak up the views as best we could. Today was going to be a long day as not only did we need to get back down we'd need to trek for at least another 5-6 hours. It takes 8 days to get to base camp, but only 4 to get back and now that altitude was no longer a factor we would be walking at a much faster pace. 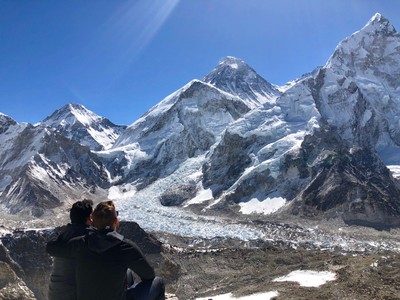 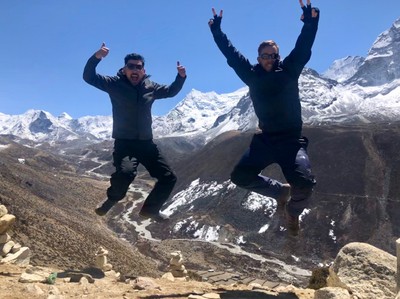 The few days we spent returning to Lukla were generally uneventful. We had the opportunity to witness much better views of the forests and mountains thanks to the welcome absence of snow and rain. We spent our final day in Lukla where it all began. We discovered it was New Years Eve and Nepal was about to move into the year 2076! We had hoped there might have been some celebrations but the place was like a ghost town. It appeared that all the locals were spending their time indoors with family. Fair enough. It rained heavily a lot that day and I was only too happy to spend it indoors drinking hot chocolate and reading the book 'Into Thin Air', a first hand account of the 1996 Everest disaster. Speaking of tragedies, Lukla airport is one of the most dangerous in the world and unfortunately a plane had crashed into a helicopter and three people had died the day before we were due to travel. So sad for everyone involved. We felt nervous the following morning boarding our flight but thankfully everything was ok. You could still see the crashed plane on the runway as we took off and I couldn't help but think about those who had lost their lives, two security guards and one of the pilots. We wish their family and friends all the best during this awful time.

We've been back in Kathmandu for the past four days and after the feeling of elation began to fade away physical and mental fatigue took its place. We unashamedly spent the last few days gorging on western foods (including KFC) and visiting the cinema. Today we paid a visit to two of the best Buddhist temples in Kathmandu, the Swayambhunath Stupa and the Boudhanath Stupa. 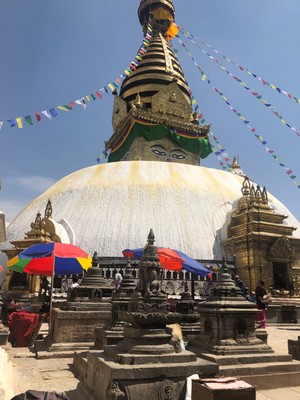 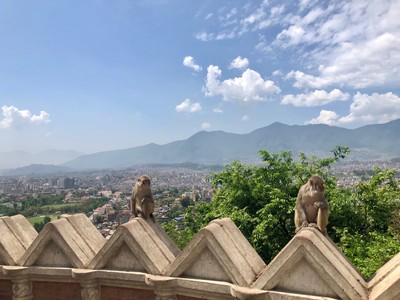 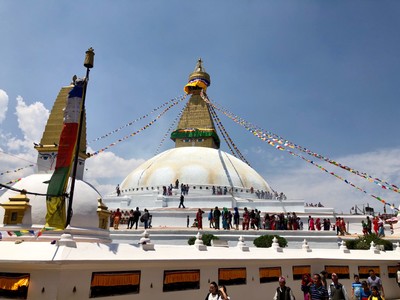 We've been in Nepal for almost three weeks now. The EBC trek is not so much a sprint but an endurance... the altitude, the cold, the sweat and dirt, the accommodation and food, the non stop walking, pushing past the pain barrier etc. Despite its challenges the EBC trek will remain with us as a real achievement and lifetime highlight. We even managed to raise AU$4,000 for the Make-A-Wish Foundation. We'd encourage anyone to give this trek or something similar a go, you won't regret it! For now we're turning our attention towards Tokyo as we board our flight tomorrow afternoon. Japan has been a long time coming for us and we can't wait to tour the country.

Well done for completing the walk and even raising money for such a good cause!

Thanks mate, much appreciated

Fair play guys!! What an experience! The Inca Trail was only a tiny bit of that, but I remember that elation afterwards and the gorging and cinema. I know you’re well on to Japan now but really enjoying catching up with coffee xx

I've heard the Inca Trail is quite a challenge too. I remember reading your blog when I was in work each week and enjoying it very much. Doing our best to be honest and shares the highs and the lows! x