We arrived in Jaipur last Friday. After the madness of Varanasi we were looking forward to the next two stops on our route, Jaipur & Rishikesh. Jaipur is the capital of the state known as Rajasthan and like most of India it is chaotic in many places. However the city is colourful and has a Northern Africa feel to it. You wouldn't have to go very far to find camels and we did spot a few elephants. We were thrilled to see that there are traffics lights and in some places pedestrian foot paths! Oh how we missed you both.

Amber Fort was the first attraction on our list, a magnificent and formidable fort. Many regard it as a great example of Rajasthan's architecture. The palace complex is built from pale yellow and pink sandstone and white marble. It reminded me a little of the palace from Indian Jones & The Temple of Doom and we really enjoyed it. You can take an elephant ride but we chose not to. 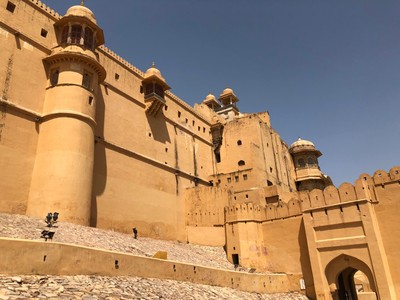 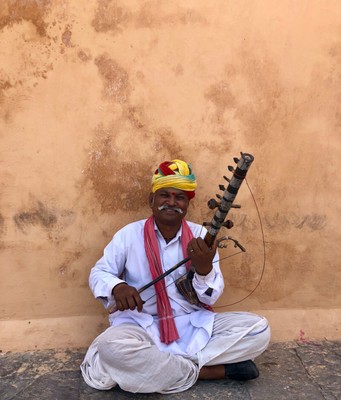 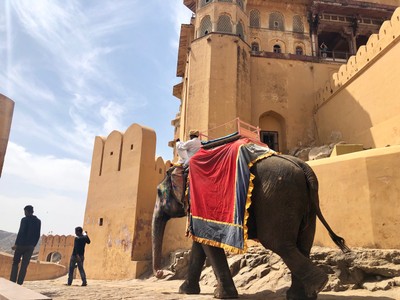 The following day we visited Gaitor, an ancient tomb belonging to many maharajas (kings). 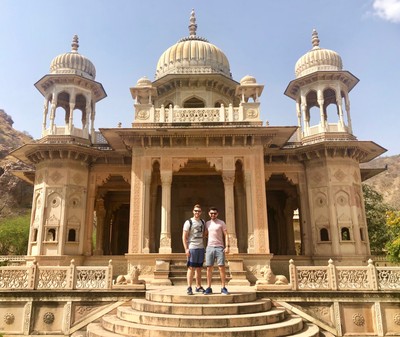 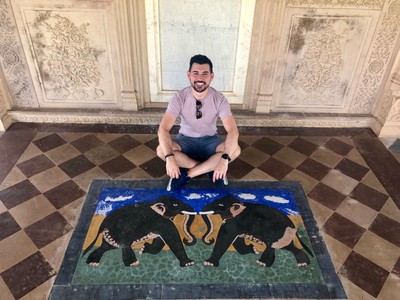 We also dropped by the Hawa Mahal, an 18th century palace constructed of red and pink sandstone. The City Palace is covered in pink too, they love it in Jaipur! 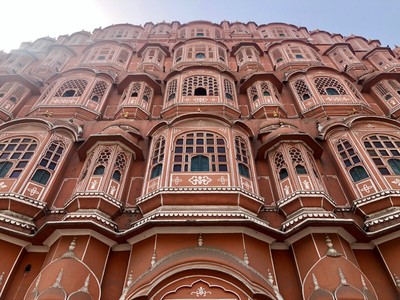 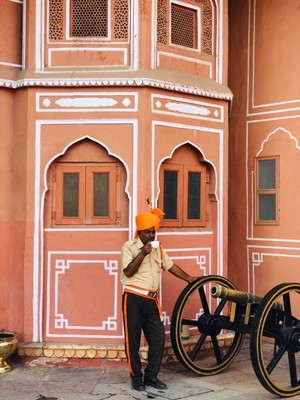 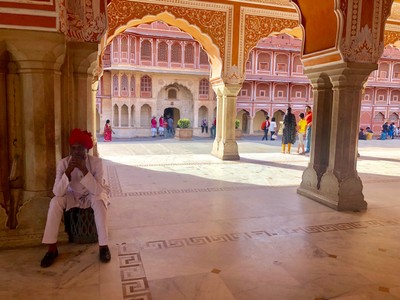 Jaipur is well known for good food and along with Bagan in Myanmar it's been our favourite stop for food. We particularly loved the Peacock Rooftop Restaurant, dining under the stars with excellent yet inexpensive cuisine, nicely themed in an Indian style and with live musicians. We had relatively high expectations of Jaipur based on what we had read and overall we were very happy with the three nights we had here.

On Monday we flew north to Dehradun, a mountainous region and the capital of the state Uttarakhand. From there we took a taxi about one hour south-east to a town called Rishikesh. Rishikesh is located at the foot of the Himalayas and is known as the yoga capital of the world. Just over 100,000 people live here and we were really looking forward to having a few days peace and quiet. Unfortunately however most people are condensed within the same area so we've still been listening to non stop beeping of the horns for the most part!

It turns out the hotel we had initially booked looked nothing like its pictures on Booking.com. We were under the impression it was a new hotel hence there were no reviews (not even a negative one) and lesson learned, we'll never book a place without reviews again! The hotel appeared to be under construction but in reality it hadn't been given any attention in years. We were very skeptical when we arrived and that skepicism quickly converted into an 'absolutely not' when we inspected the room. The staff must have heard this many times and had no issues letting us cancel for free. We quickly booked another online and all was well. We decided to pick a place in the heart of the action. Check out the picture below, it's the view we had from our room, and one of the best room views we've ever had. 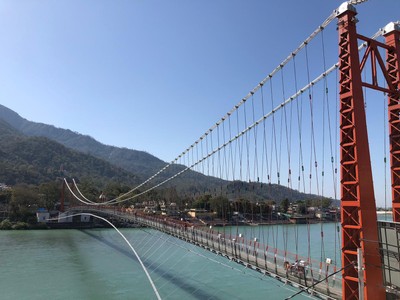 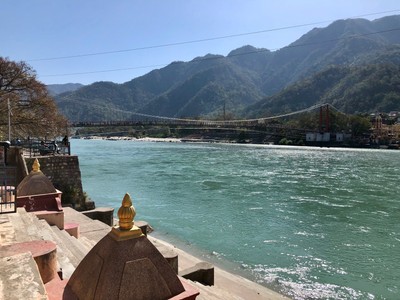 Rishikesh is meant to be one of best places you can find for yoga it certainly is hippie central. All the hippie stereotypes you've ever seen were all gathered here together in a town where fish, meat and alcohol are banned and there are an abundance of yoga and meditation classes available on the hour. I've never seen a 'chakra healing' class before and there are many here. In fact we literally missed a very important annual global yoga festival by about two weeks. It's probably for the best. Having said that, we can be pretty quirky ourselves and this was completely different to any other stop we've had. Aside from the yoga and hippies, Rishikesh is one of the most naturally beautiful places in India and also well known for having great white water rafting. And this is what attracted us.

On Tuesday we enjoyed our favourite activity so far, rafting 15km with a group of really fun Indians down the Ganges river. Unlike Varanasi where the river is highly polluted it is very clean in comparison and although cold we enjoyed swimming in it during the rafting session. The water is physically so much closer to its source in the Himalayas and is appears as a beautiful emerald green colour. We could look at it all day. 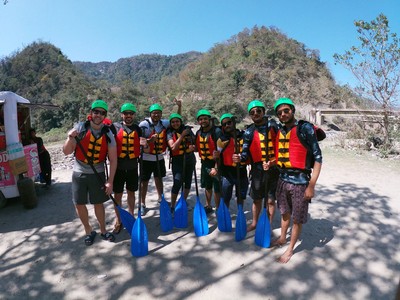 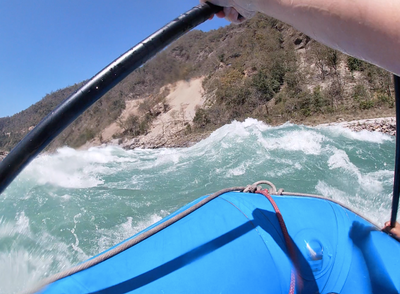 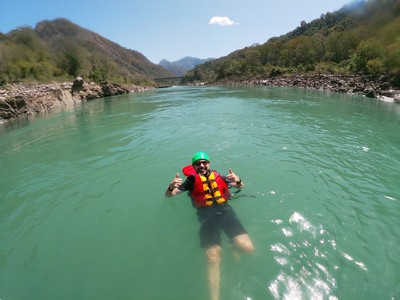 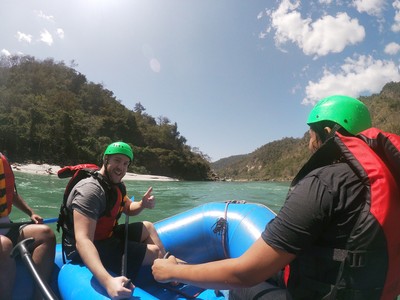 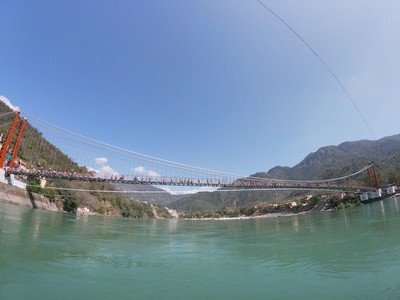 We both love nature and the next day we booked a day long trek with a local guide. We began at one of the highest points overlooking the entire area and from there we got our first glimpse of the Himalayan mountains. 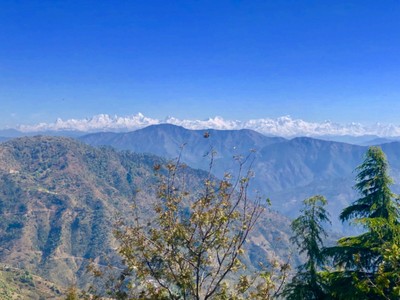 We spent hours walking and taking in the views. Near the end we were able to take a dip in the local waterfall. It's not as cold as the Ganges but certainly refreshing enough and a perfect escape from the heat on your back. 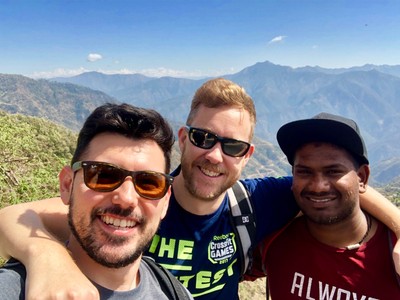 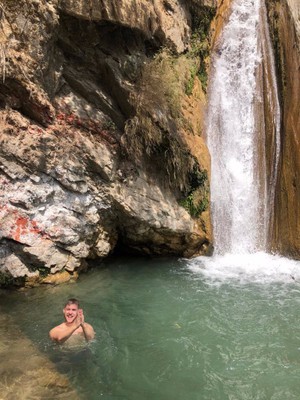 That evening we took part in our first ever meditation class. You know, to see what the fuss was all about. It would have been rude not to, right? We tried an introductory class. We've no photos to show you but I can tell you our teacher was as quirky as you'd hope for. We focussed mostly on breathing techniques and after an hour we both felt so relaxed, our minds floating away to the sounds of chanting in the distance and ancient bells being rung every so often. Perhaps we shouldn't have been so judgement after all? There's a part of me that would love to spend a week in Tibet with buddhist monks embracing more of my spiritual side. Maybe one day I'll shave my head and buy some robes. There are a number of Hindu statues dedicated to the gods in Rishikesh and we were lucky enough to stumble upon a dancing ritual in the town by one of them. 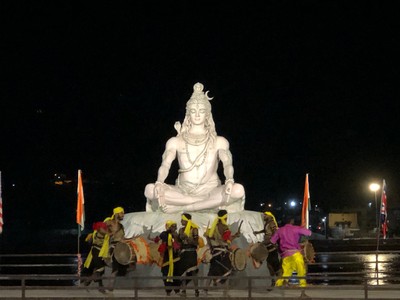 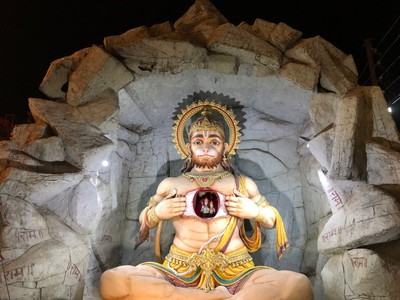 I'm afraid we only lasted two full days without meat and on the evening of the third we took a tuk tuk 30 minutes outside of the town for some chicken, fish and a few drinks. Bad wannabe temporary vegans! Rishikesh has been the highlight of our entire trip so far. We loved it. Today we head south once more, this time to the country's capital New Dehli. We've got four nights left in India before we depart for Nepal.