Today is day six of thirteen on the trail and it's been challenging in different ways. Every day we move forward it feels like a small victory as both the days and nights are long. I’ll rewind back to Saturday when we left Namche Bazaar… Alberto had been feeling very sick with a cold and it was touch and go whether he’d be able to continue. With thanks to the classic bowl of hot water, herbal remedy and a towel over the head followed by some antibiotics he started to feel a lot better and we could continue on together. Phew!

We woke up that morning colder than the previous day in Namche and it only took a peak outside the curtains to understand why. There was no sign of the sun as the sky was filled with cloud and rain looked imminent. We began a steep uphill walk to the top of the town just before 8am, and that’s when the rain began. We were told by others who were on their way back to look out for beautiful forests during this section. With the rain it didn’t look so great and visibility was poor. Our main priority was staying dry and our waterproof clothing did the job. After a couple of hours of walking through the mud and avoiding animal droppings (believe me there’s plenty of it) we were able to stop for tea and it tasted like the best cup of tea I ever had in my life. Please sir, must we go back outside? Come hither young men, you must move on.. grow a pair! Oh alright then. 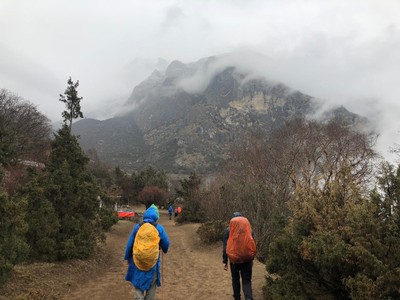 After a nice flat section (thank the gods, the old and the new) we were soon losing altitude and we realised this would have to be regained. And fast. Our final few hours were uphill and unlike day two we took it much slower and paced ourselves. It was far more manageable and the cold weather did mean less sweat. One must stay positive! I had envisioned another few hours of this and when we arrived at Tengboche our next stop I couldn’t believe it. This time I could actually speak on arrival and my legs were in decent shape. It gave us an increased sense of confidence that we could do this. #gotthis? We’ll see… 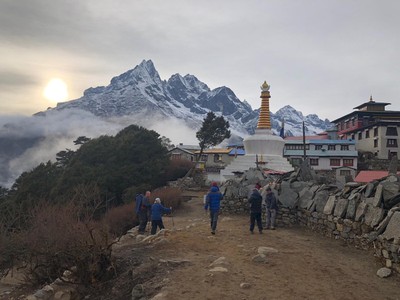 Tengboche like most towns in the Himalayas is home to only a few hundred people but is home to one of Nepal's most famous monasteries. After some more tea we paid a visit and it definitely had that comforting feeling of serenity inside. Quick side note… I’ve lost count of how much tea I’ve drank at this stage and I am going on a tea strike as soon as I'm back in Kathmandu. By now you could see a lot more snow and although it was pretty cloudy when we arrived it later cleared and we had a magnificent view, including our first sight of Everest in the distance. 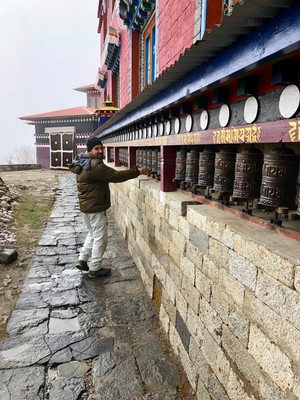 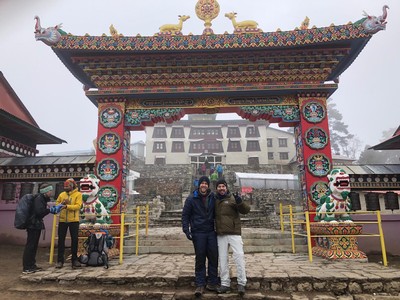 I had a terrible night’s sleep. The room was freezing and temperatures at night time are now dropping below freezing. I wore almost everything I had and could barely move in the sleeping bag. It was anything but cosy. FML. I took a couple of herbal sleeping tablets to help send me off but I must have only slept for a couple of hours in total. I had to sit up a few times as I felt I couldn’t breath properly. This is quite common and apparently sleeping tablets can cause this. No more sleeping tablets for me so! Aside from that you’ve got a lot less oxygen than usual and with five layers of clothing, a sleeping bag and a duvet it all feels very claustrophobic. I told myself to take lots of deep breaths and stay calm. We woke the following morning to a blanket of snow covering most of the fields surrounding our lodge. 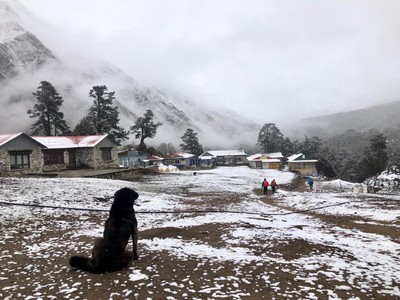 Snow was definitely better than rain but I couldn’t help but think to myself for feck sake, they’re really testing us now between Alberto getting sick, rain all day yesterday and snow today. On we went and the initial scenery in the snow was quite beautiful. It had a kind of wintery Japanese quality to it. We’ll take that. A few hours later and you could notice everything becoming a lot more desolate. Vegetation became less frequent and large areas that resembled a wasteland began to appear. We had expected this and it felt like a check point that we were getting closer to our destination. The walk that day was more of a consistent gradual increase and again we could manage this. 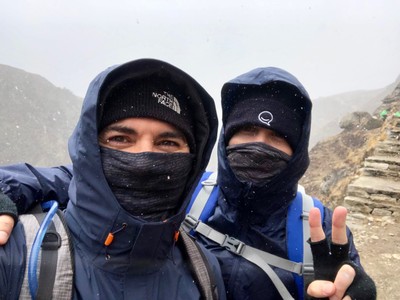 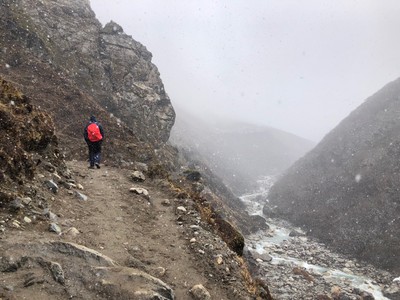 We’ve been staying at our current stop in Dingboche for two days to allow for acclimatisation. We’re 4,410 metres above sea level but we still have another 1,000m to go. The temperature has noticeably dropped and even at 7am this morning it was -6 degrees celsius. I did sleep a lot better though, Alberto not so much. We’re starting to think that perhaps the physical part of this trek won’t be our biggest obstacle but perhaps it’ll be the cold and possibly the altitude as we get higher. We met a Japanese lady named Kayko back in Phakding (our first lodge) and she turned around at the stop we’re at now due to the cold. We sort of shrugged this off and told ourselves ‘ah it’ll be grand, she clearly overreacted’ until she told us she had been to Antartica seven times as a tour guide! Gulp.

Going to bed has become our least favourite time of the day as we desperately try to stay warm and comfortable enough to nod off. We’re wearing thermal vests and leggings and filling our bottle with hot water and placing it in the sleeping bag to provide some heat and comfort. Unfortunately it’s your face that feels the cold the most. You can put your neck scarf around your face but then it’s difficult to breathe so you’re left with pulling part of the sleeping bag over your head but allowing just enough space for the air to come in that doesn’t feel too cold, whilst getting comfortable enough to fall asleep at the same time. It’s definitely an art and we’ve yet to master it! The lodges are starting to decline in quality and we expected this. We were actually give an 'ensuite room' at this stop but when we saw the toilet without a seat or a flush I couldn't help but laugh loudly about it. Flushing would require dropping large amounts of water in via the bucket we were provided. I wonder what our final two lodges have in store for us...

I haven't spoken about food yet but can say overall we're pretty happy. Animals are not allowed to be killed on the mountain for religious reasons so after Namche so we were told by our guide to avoid any meat. We've only had meat twice in the past week and unlike in Rishikesh we're not missing it as much as the meals here are more varied and freshly made by the Nepalese with love and pride. We've had toast, fried/scrambled eggs, porridge, muesli, corn flake and Nepalese bread for breakfast. Lunch and dinner are interchangable and could include all sorts of rice and noodle dishes, soups, curries, potatoes, veggies etc. The variety is starting to diminish so perhaps in another few days we'll be starting to struggle.

Today is a beautiful day weather wise and this morning we trekked a few hundred metres up for some panoramic views of the glaciers and the fourth highest mountain in the world, Lhotse. We’re off to a bakery now to enjoy a warm pastry and watch a documentary on the Sherpas. The Everest Base Camp Trek is overflowing with challenges and rewards. I’ve shared a lot of the challenges we’re facing but equally I am almost pinching myself being in such a remote and beautiful part of the world. We have just a few more days before we hopefully reach Everest. Fingers crossed.